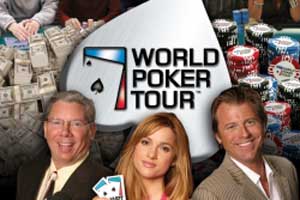 Released a few years ago, World Poker Tour for the Sony PSP is actually the best portable poker game made so far and some would argue that it's a better way to play the game than anything shy of a dedicated online poker room or live tournament.

The game's solid structure and realistic experience has been praised by reviewers and poker players alike and the artificial intelligence used makes decisions more than merely calling or folding based on patterns you've seen.

The experience starts early, when you create your character.
While you can base it on yourself (and I did, my first time through,) it actually adds a level of fun to the game when you go all-out with your designs, in particular the clothing and accessories that are supplied by a seemingly endless virtual wardrobe.

The more you win in the games, the more money you earn for the shops, the more your character can be “pimped out,” adding a touch of realism where there really didn't need to be one and expanding on the game's look and feel.

The play itself, however, is what's important and it's some of the best, even if there have been some debates about its relative difficulty for the casual player.  Personally, I found the game to be a good challenge, but not unduly hard.

A novice could well find themselves lost in the woods, but for any legitimate player, the game offers one of the most satisfying simulations available.

From the player chatter (which is varied and can actually point you in the direction of a good play) to the artificial intelligence's keen decision-making skills, the most essential element of this game is as pleasurable as it is challenging.

In addition to straight Texas Hold ‘Em (the bread and butter of online and real-world poker,) World Poker Tour for the PS offers seven-card stud, pineapple, billabong and double-flop hold ‘em in addition to a fantastic create-a-game mode that is unmatched by any other game.

You get to tinker with a staggering array of options that let you create totally bizarre modes of play, perfect for recreating late-night poker games with your friends.

And speaking of your friends, the multiplayer mode for World Poker Tour is a pleasure to use.

The PSP's wireless link will allow you to set up a game with up to eight other players and you'll see their avatars and play against them just like you would play the game in single-player mode, but you can actually win their virtual cash and use it to build your bankroll.

You can incorporate any of the game modes, including the custom ones from the create-a-game features and even play against people who are playing World Poker Tour online from their PlayStation 2. (Admittedly, we had to dust one off to try this out and the online poker feature was not nearly as smooth as it should have been.)

Overall, this is a great way to keep playing poker on-the-go, whether you're stuck in an airport that's charging an exorbitant amount for WiFi or wanting to introduce someone to the game and they're firmly against the idea of playing online poker at a site like Bodog. If the latter was the case, I'd say that you'd need to look at getting better friends, really.