How to Play Sets and Trips 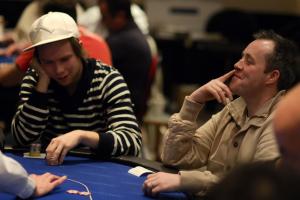 One of the most exciting hands to flop is three-of-a-kind. When I flop a set or trips, my primary goal is to figure out how to get as many chips as possible from my opponent. Naturally, though, there are many things to consider, starting with the type of three-of-a-kind that presents itself.

For those of you who are new to poker, I would first like to clarify the difference between a “set” and “trips.” A set is a three-of-a-kind made with a pocket pair and one community card. Trips is a three-of-a-kind made with one of your hole cards and a pair on the board. This vocabulary distinction is not important when it comes to how you play the hand, but rather when describing the action to somebody. The listener will understand what happened better if you use the terms “set” and “trips” appropriately rather than interchangeably.

Holding a pocket pair, the chances of flopping exactly a set are 10.78%. Most people I have seen like to slowplay sets, which is understandable since a set has a strong likelihood of holding up through the river. But, like any hand, there are times to slowplay and times to put the pedal to the metal.

Slowplaying is most appropriate when you think your opponent is weak, regardless of whether you have position on him. Your hand is very strong – let him see a cheap turn and/or river in hopes that he catches a card that he thinks gives him the best hand. Out of position, another opportunity for slowplaying is if you have reason to believe your opponent is a chronic bluffer and didn’t hit anything on the flop. For example, maybe you have J-J and put him on A-K on a flop of J-7-2. If you think he might bluff at the pot, check to him and let him hang himself with a bluff. You can just smooth call and let him do the same thing on the turn and river, or better yet, let him hit his ace or king.

In position, most other scenarios lend themselves to playing fast. Think your opponent has a strong hand, such as an overpair or top pair? Raise him if he leads out and bet if he checks, hoping that he check-raises you. If there is no ace or king on the flop, bet or raise to try to get the most out of that betting round. Aces and kings tend to be scare cards and players really slow down if one shows up and they don’t have one in the pocket. Therefore, you don’t necessarily want to slowplay only to have one of those scare cards appear on the turn or river, causing your opponent to pack it up. And, of course, if the flop presents flush or reasonable straight possibilities, you may want to make your opponent pay to chase a draw.

What about set-over-set? Don’t worry about that. While it happens, it’s rare enough that you shouldn’t even think about it. If you get stacked by a better set, so be it. Similarly, don’t worry about letting your opponent draw to a better set. That’s a two-outer and again, just bad luck if it happens.

As for trips, you will flop that hand 1.35% of the time with unpaired hole cards. Many people consider trips worse than sets because someone else can flop a full house and beat you. That’s true, but like set-over-set, that’s not really something to worry about, as there is only a 0.74% chance of someone flopping a boat with a pair in the hole. The bigger vulnerability to trips is someone else outkicking you with the same trips, particularly if you have trip aces with a low kicker. In the case of flopping trip aces with a weak kicker, betting/raising is usually the best way to go. If you have the best hand, you’ll probably take it down right away and if you have the worst hand, you’ll probably get raised/re-raised. While it isn’t fun to get raised in that situation, the benefit is that you’ll have a good idea that you’re beat and can get out without losing a huge pot.

I have read strategies that say to slowplay trips most of the time because aggression on a paired flop will scare most players away. But this isn’t necessarily true most of the time. It is true that the main problem with trips versus a set is that it’s harder to camouflage your hand, but that doesn’t mean you can’t play them fast. Slowplaying can work if you put your opponent on a middle pair (ex: 7-7 on a flop of A-A-4) or bottom pair (ex: K-Q on a flop of A-A-Q). There’s a solid chance that your opponent will play these hands aggressively, as he’ll know there is a low probability of you having trips.

Of course, there is some risk if he has middle pair and hits a boat on the turn or the river, but you can take your chances with the two-outer. Flopping trips with top kicker can also be a decent time to slowplay, but if your opponent comes out firing, feel free to jam the pot and pray he also has trips.

In all other situations, I like to be the aggressor, whether that means leading out, raising, or re-raising. If I think my opponent has an overpair, then let’s get into a betting war. If I think he flopped top pair to my bottom trips, then bombs away. If I think he’s on a flush or straight draw, then I want to make it expensive for him to try to hit his draw.
by Pokernewsdaily.com

Is Poker More than Just Skill? 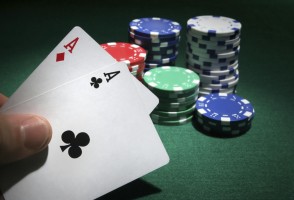 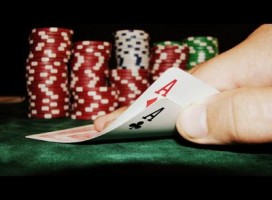