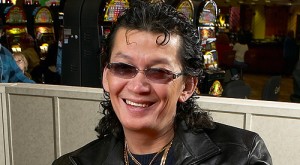 Thuan B. “Scotty” Nguyen (born October 28, 1962) is a Vietnamese American professional poker player who is a five-time World Series of Poker (WSOP) bracelet winner, most notably as the winner of the 1998 World Series of Poker Main Event and the 2008 WSOP $50,000 H.O.R.S.E. World Championship. He is the first and currently only player to win both the WSOP Main Event and $50,000 Players’ Championship.

Scotty Nguyen was born in Nha Trang, Vietnam, and came to the United States at the age of fourteen. He was expelled from school for spending too much time in underground poker games. Nguyen attended dealer school at the age of 21 and was employed at Harrah’s poker room. There he made about $150 a night and lost most of it playing $3–$6 stud. He described himself as a “fish” but wanted to gamble regardless.

His luck changed in 1985 when he was invited to Lake Tahoe to deal in a no-limit Hold’em tournament. He dealt all day and played cash games all night with the meager bankroll he brought with him. He built his bankroll to $7,000 and felt he was invincible. He returned to Las Vegas and gambled his bankroll up to $1,000,000. His name spread around Vegas and before he knew it he was playing poker with Johnny Chan, Puggy Pearson, and David Grey. He purchased a Chevrolet Camaro for $17,000, a Corvette for $21,000 and a condominium for $60,000 all in cash. He lived in Caesars Palace and was winning $50,000 to $100,000 a night.

Bad habits plagued Nguyen as recreational use of marijuana, cocaine, and alcohol developed into full-scale addictions. After a bad losing streak, he ended up going broke. Nguyen was spared a room and $5,000 in cash.

Nguyen had to rebuild his bankroll after losing his million. His next success came at the 1997 World Series of Poker where he won the $2,000 Omaha 8 or Better, netting a profit of over $150,000. Unfortunately Nguyen blew this bankroll again and was completely broke shortly before the 1998 World Series of Poker. Nguyen had to play in a small satellite tournament which he did not even have enough money to buy into. Mike Matusow saw potential in Nguyen and decided to bankroll 1/3 of the buy in.

Nguyen is noted for playing with lots of emotion. He went on to win the 1998 World Series of Poker and split 1/3 of the winnings ($333,333) with Mike Matusow. On the final hand of the 1998 World Series of Poker’s Main Event, a full house was dealt on the table (8♣ 9♦ 9♥ 8♥ 8♠). Nguyen made the memorable quote to his opponent Kevin McBride: “You call, it’s gonna be all over baby!” McBride called, saying “I call. I play the board.” Nguyen beat McBride with a better full house by holding 9♣ J♦. Nguyen’s Main Event triumph in 1998 was followed immediately by tragedy—the very next day, one of his brothers was hit by a car back home in Vietnam, and killed. For this reason, Scotty does not wear his 1998 WSOP championship bracelet.

After making several World Poker Tour final tables, Nguyen eventually won a WPT event in January 2006, defeating Michael Mizrachi heads-up in the fourth season Gold Strike World Poker Open when his A♠ Q♠ made a flush against Mizrachi’s A♣ J♦ on the very first hand of heads-up round. With this WPT victory, Scotty became one of only 5 people to win both the main event of the World Series of Poker and a World Poker Tour title. Nguyen earned a second place finish at the 2007 World Series of Poker in the seven card stud high low split eight or better event won by Eli Elezra. Scotty stated after the event that he hadn’t played cash games in over two years because he enjoys a friendly environment which is difficult in serious cash games. Scotty also nearly made the final table of the 2007 World Series of Poker Main Event, finishing in 11th place out of a field of 6,358 and earning $476,926.

At the 2008 $50,000 World Series of Poker H.O.R.S.E. event, Nguyen exhibited what many have considered objectionable, and even rule-breaking behavior. In the broadcast of the prestigious event, Nguyen was shown drinking numerous alcoholic beverages while swearing and scolding others (including waiters/waitresses) at the final table, drawing criticism from commentators. Following the event (which Nguyen won), Nguyen issued an apology to his fans and stated that the event’s editing depicted him unfairly. He also cited issues like exhaustion, frustration with the perceived gloating of Michael DeMichele, and pressure to succeed as reasons for his unconventional behavior. Nguyen later formally apologized to the fans in an interview, and said that he no longer blamed any other players for his behavior, and that there was no excuse for his behavior at the 2008 H.O.R.S.E. event.

In 2009, Nguyen won the inaugural LA Poker Classic $10,000 H.O.R.S.E World Championship at the Commerce Casino’s annual LA Poker Classic Series. This 1st place finish earned him $339,743, and further cemented Nguyen’s reputation as one of the greatest masters of all variations of fixed limit poker.

As of 2010, his total live tournament winnings exceed $11,250,000. Of those winnings, $4,727,717 have come at the WSOP. Nguyen has also made appearances on the Ultimate Blackjack Tour playing Elimination Blackjack. Nguyen also made an appearance on Late Night with Conan O’Brien in April 2004.