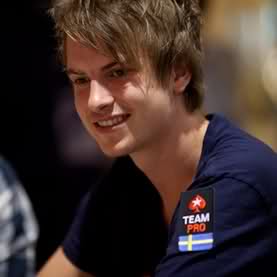 Viktor “Isildur1” Blom is a Swedish high stakes player who captivated the poker world long before his true identity was revealed. He was in fact only known as Isildur1 from 2009 to the beginning of 2011 which gave Blom the allure of having a secret identity. There were various rumours on his real identity that ranged from fellow Swedish pro Robert ‘Gulkines’ Flink to 11-time WSOP bracelet winner Phil Hellmuth. Most people in the poker community, however, still believed it was Blom.

Isildur1 was a breath of fresh air to the poker world in 2009. He jumped into the nosebleed stakes scene in November and caught the majority of Full Tilt’s high stakes regulars off-guard. He has said that he thought most of the players who played that high were playing too scared and that it was easy to bluff them knowing they were afraid of the money at risk. He took on Tom Dwan in an epic heads-up encounter which included some marathon sessions and by the end of it, the mystery Swede was up more than $5 million on the New Jersey Wonder Kid. He managed to take some dough off Ivey too, but he didn’t fare so well against Patrik Antonius, who kept using him as an ATM, refusing to play him at NLHE.

This is one of Isildur1’s weaknesses – he caters too much for his opponent allowing them to decide the type of game they wished to play. He jumped straight into the nosebleed PLO scene without having played any smaller stakes on the Euro sites which he crushed in HUNL prior to playing on Full Tilt. Very few would give him action at NLHE and those who did didn’t fare so well: he took half of Dan “Jungleman12” Cates’ bankroll from him and he crushed the likes of Tom Dwan, Scott “urnotindangr” Palmer and Justin “ZeeJustin” Bonomo.

Isildur1’s spectacular run came to an end at the hands of CardRunners professional Brian Hastings, to whom the Swede dropped $4.2 million over a single session, thus breaking all records for single-session swings. During his run, Isildur1 contributed to the fall of several other records as well. Hastings ran really hot during the session and was $3 million above EV by the end of it.

The incident raised quite a few eyebrows when Hastings admitted afterwards that he had made use of hand histories and analysis acquired and performed by his fellow CardRunners professional, Brian Townsend. Having been felted at Full Tilt, Isildur1 rebuilt his bankroll at other sites, and returned with a vengeance to Full Tilt’s nosebleed tables in 2010. Unfortunately, Blom wasn’t able to dominate the regulars like he once did; however, better things were still ahead for the Swede.

At the start of 2011, speculation was running rampant that Isildur1’s identity would finally be revealed. This all came to fruition on January 8th, 2011 at the PokerStars Caribbean Adventure when the previously unknown Isildur1 was revealed to be Viktor Blom.

PokerStars also announced that Blom would become the newest addition to Team PokerStars. Since his signing, Isildur1 has had his million-dollar plus swings during his time with the site, but he decided to part ways with the site on 16 August 2012 with many speculating that he was going to join Full Tilt when it re-opened. This is exactly what happened and Isildur1 is now one of the Full Tilt Professionals playing exclusively on the site.