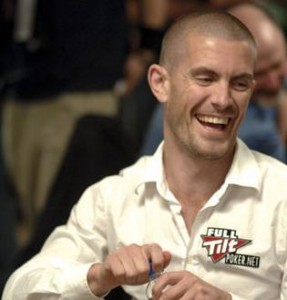 Gus Hansen, also known as The Great Dane, is a professional ‘gambler’ in his own words and is known for his enormous swings at the poker table. Before turning to playing poker professionally in 1997, Hansen was already a world-class backgammon player and a youth tennis champion.

Gus was born in Copenhagen, Denmark where he displayed a competitive streak early on. He played tennis as a child, but backgammon was his real career choice. He moved to New York where the backgammon scene was supposed to be hotter than in Europe, but eventually got hooked on poker. He had actually played poker before, back in 1993 when he was an exchange student in Santa Cruz, California. Nowadays he resides in Monaco like fellow high stakes professional, Patrik Antonius. One can assume that is for tax reasons as there is no tax on poker winnings in Monaco. The state is known for its rich citizens and affluent lifestyle.

He has been known to take private bets on various personal athletic challenges such as a boxing match against fellow Dane, Theo Jorgensen. Hansen has been involved previously or currently in several online business ventures, including PokerChamps.com, ThePlayr.com and GusHansenTV. He was partners with Tony G and Erik Sagstrom in PokerChamps.com which was sold to Betfair (rumoured to be for €13 million).

The wild swings of Gus can be are no more evident than by looking at his HighStakesDB graph, where he was initially very unsuccessful from the beginning of 2007 to the summer of 2008 (-$2.46 million). Fortunately for Hansen, there was light at the end of the tunnel when he went on a big run over the next few months to book $2 million in winnings by November 2008. However, he suffered through one of the worst runs in poker history as he lost over $11 million in less than two years. Since then, Hansen has risen from the ashes to earn over $5.5 million during the end of 2010/first half of 2011.

He was a member of Team Full Tilt prior to Black Friday and was not involved in any of the controversy following the incident. He was re-signed as the first brand ambassador of Full Tilt under the new management team and can now be seen playing the biggest stakes there as one of their Professionals. During his time away from online poker, Gus is often playing the biggest live cash games in the world either in Bobby’s Room in Vegas or in StarWorld Casino in Macau.

Gus has a very impressive tournament record with over $11 million in tournament winnings. He has won three World Poker Tour titles, the 2007 Aussie Millions Main Event, the 2010 Poker Million IX, and was the Season One Winner of the Poker Superstars Invitational Tournament. He also has 8 cashes in the WSOP which includes a bracelet in the 2010 WSOPE £10,000 NLHE High Roller Heads-Up event.

Hansen is also a TV poker star having appeared on numerous shows such as High States Poker, Professional Poker Tour and Poker After Dark. He’s known for his looser-than-loose and super-aggressive style, which of course makes for excellent TV, so no wonder why he’s appeared in more televised events than your average multi-millionaire poker professional. In addition to the television appearances, Hansen also wrote a popular book called Every Hand Revealed, in which he discussed various hands from his Aussie Millions Main Event victory.